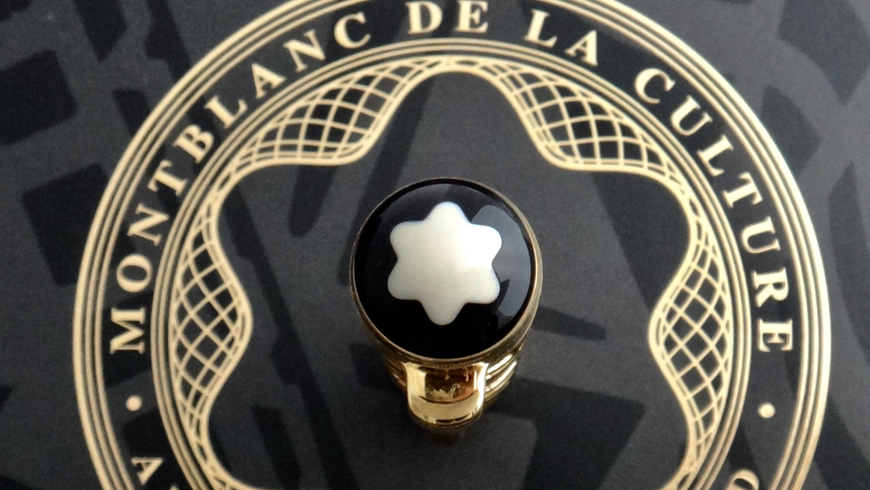 The highest of distinctions is the service to others.

Despite various period of turmoil during his reign, King George IV of Britain, with his appreciation for the fine arts, managed to shape British culture to his taste. His influence is still visible today. Part of his legacy, paintings by Sir Joshua Reynolds, Rembrandt, Jean-Baptiste Matrin, Gainsborough and George Stubbs are part of the Royal Collection today. Because of the monarch’s penchant for culture, art forms from the period of his reign are known as those of the Regency Period.

The 1995 Prince Regent is an important model for MB history because for the very first time they launched a 888 version, more precious and luxurious compared to the “standard 4810” one. Beyond that MB produced a LE8 version for their program “Montblanc de la Culture Arts Patronage Award”. Montblanc produced just 8, 3 of them was gifted respectively to: Jane Alexander (US), Ikuo Hiramaya (JP) and Gian Carlo Menotti (IT), the remaining 5 was offered to the top MB clients at the time. I bought mine from one of those distinguished Collectors.
For sure the Prince Regent 8 is not a “bling bling” model. The difference between the “standard 4810 and 888” models is not that big. That’s a fact. But you have not to forget that this model was launched in 1995. At that time, Montblanc Artisan dept. did not yet exist (!). With the Prince Regent MB attempted to set the bar very high (first 888 pen ever).
And this 8 edition was the top of the line.
In my career I saw thousands of important MB LE pens, but today I’ve just two MB pens from Montblanc de la Culture Arts Patronage Award (The Prince Regent 8 and Karl der Grosse 12). Adding them to a “private” collection is – in my opinion – an opportunity not to be missed because it means to write, as a distinguished Collector, his own name on the most prestigious and noble MB program (AWARD).

A fascinating 750 solid yellow gold fretwork pattern winds over the deep blue precious resin barrel pen.
The 18K 750 gold nib is decorated with a fine engraving of this insigna of the British monarchy in the Regengy Period.
The cap is decorated by a crown whose delicate composition recalls the keep eye for detail of royal craftsmen of the past.
In this 8 version the crown is decorated with no precious stones. However on the other side of the cap there is a specially designed area adorned with 6 diamonds (where the Collector could engrave his name or initials).
It should be noted that this 8 edition presents a specific cap engravings (different both from 4810 and 888 version) referring to the year of the Award (1995).

Well, let’s have a look at the packaging.
The pen was delivered with a “standard” wooden display box (same as the 4810 version and smaller compared to the 888 box). The inner label reads as follow:

It is courious how MB delivered this model with the same outer box as the 4810 version and just used a different label.
It comes in the same condition as Montblanc deliver it to the previous owner, i.e. with specific display box and outer box. No papers (as it was a hors commerce edition)
Very important model in early Montblanc production.
Limited Edition: one of eight (the serial number is not engraved on the fountain pen) 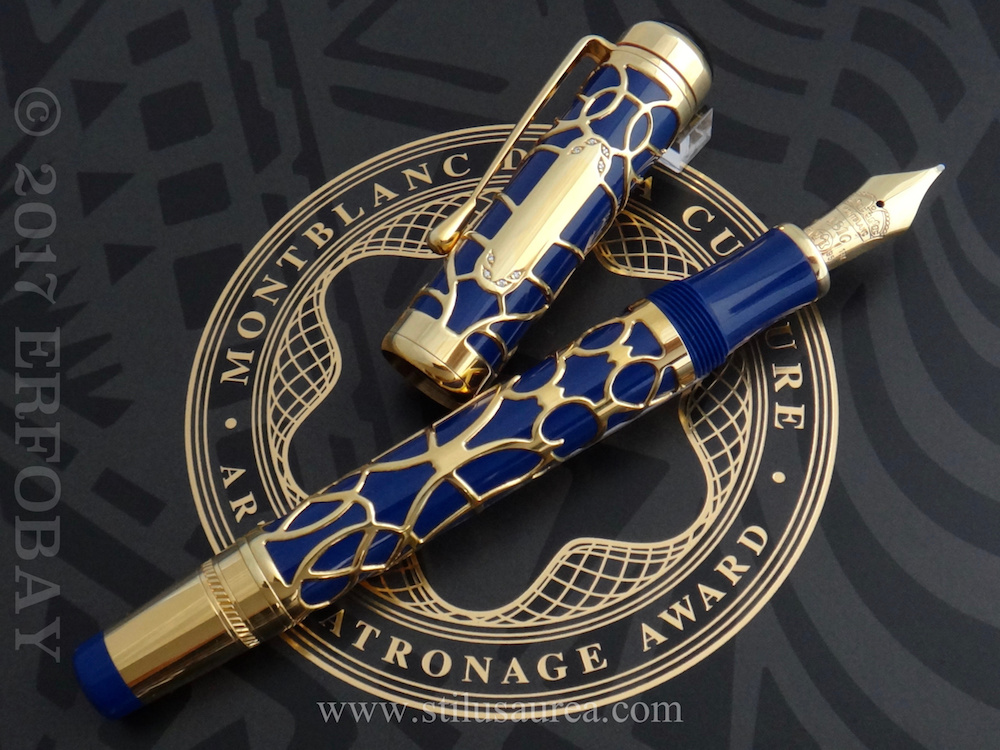 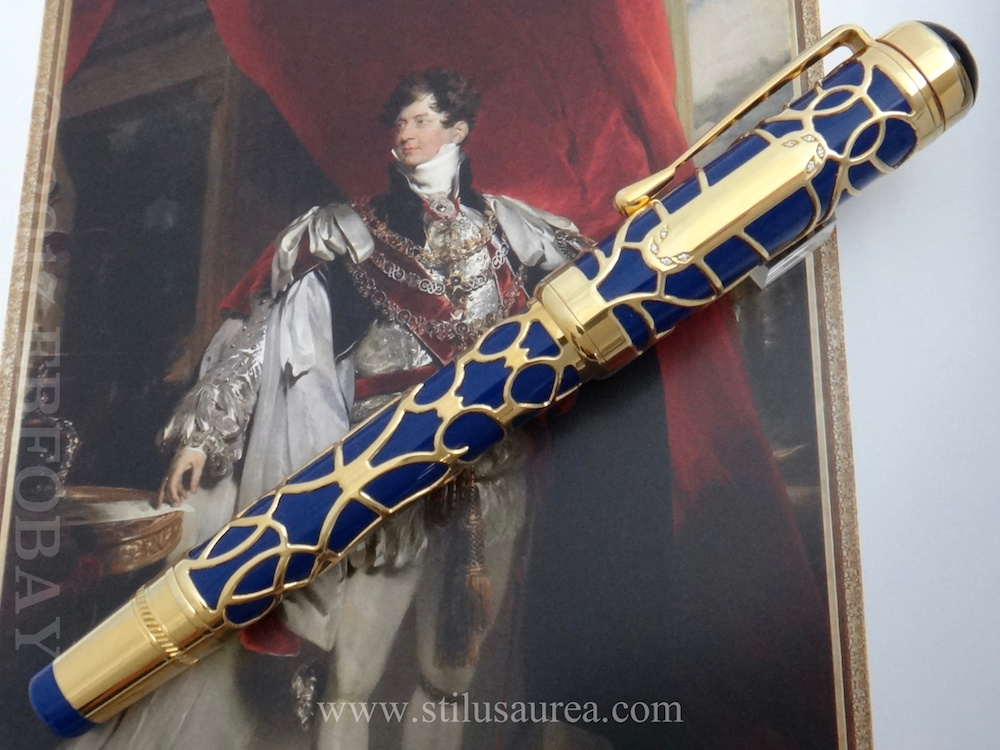 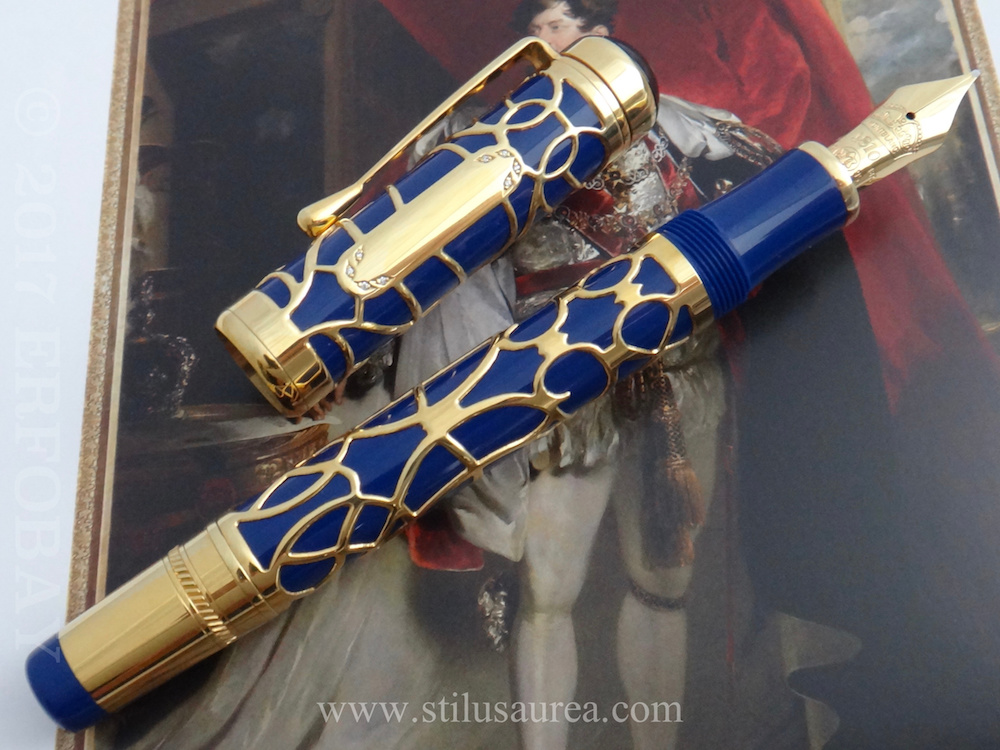 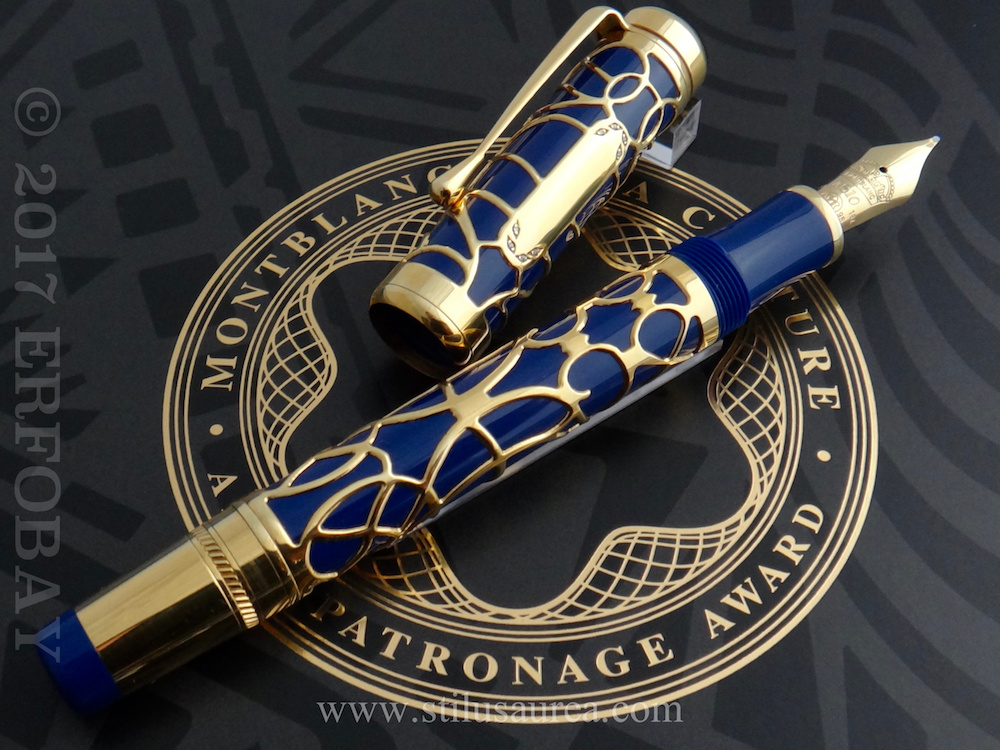 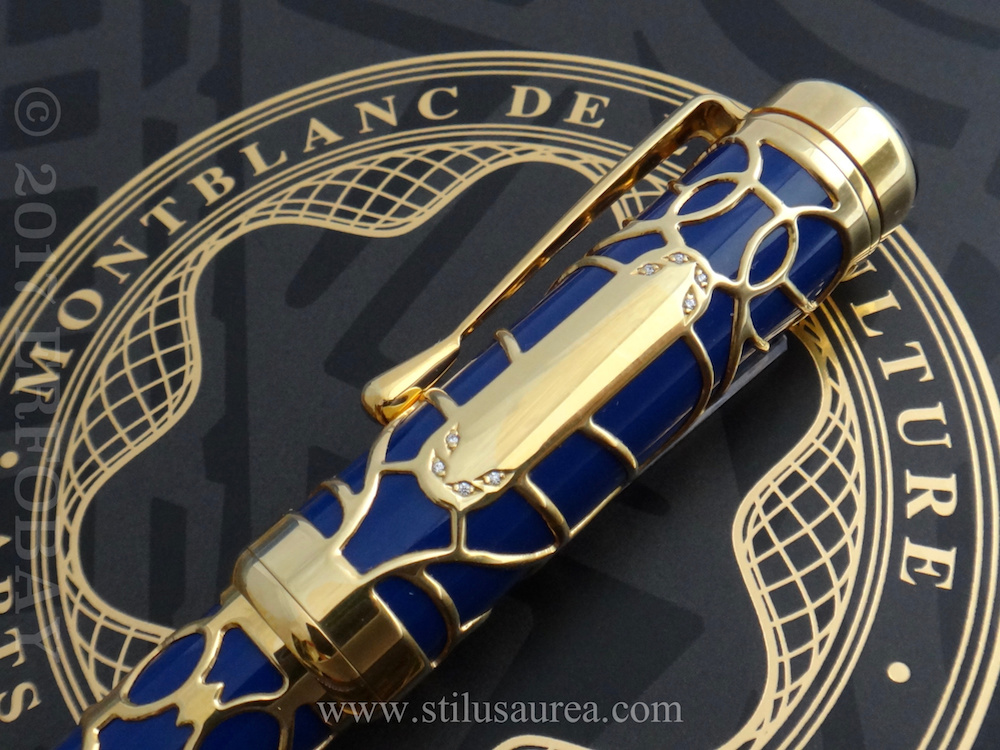 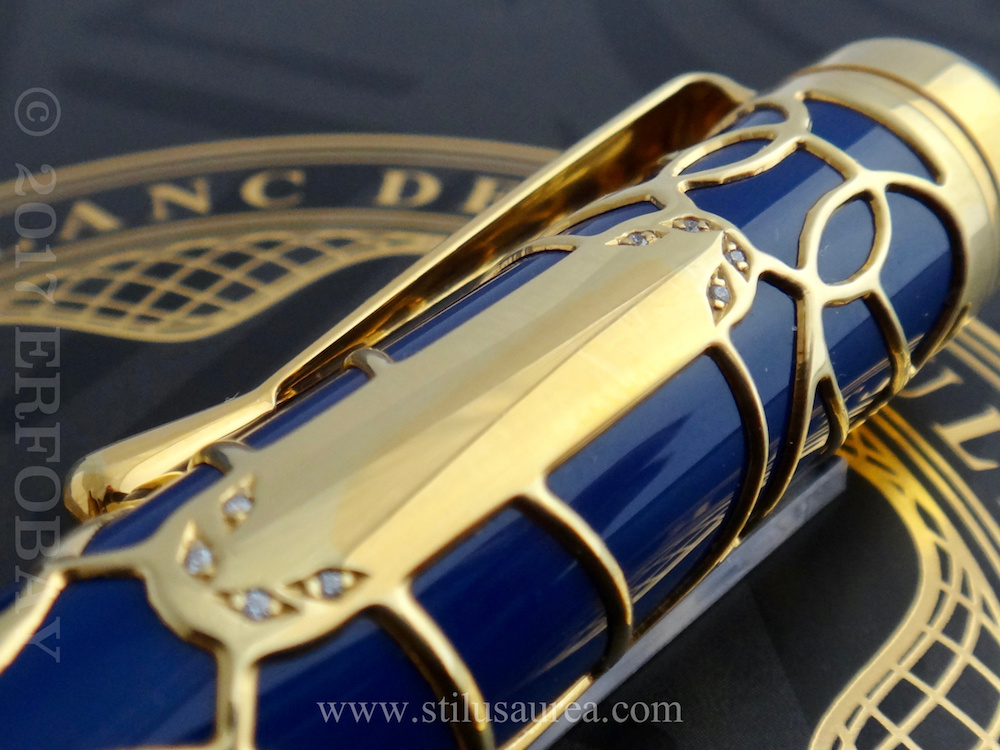 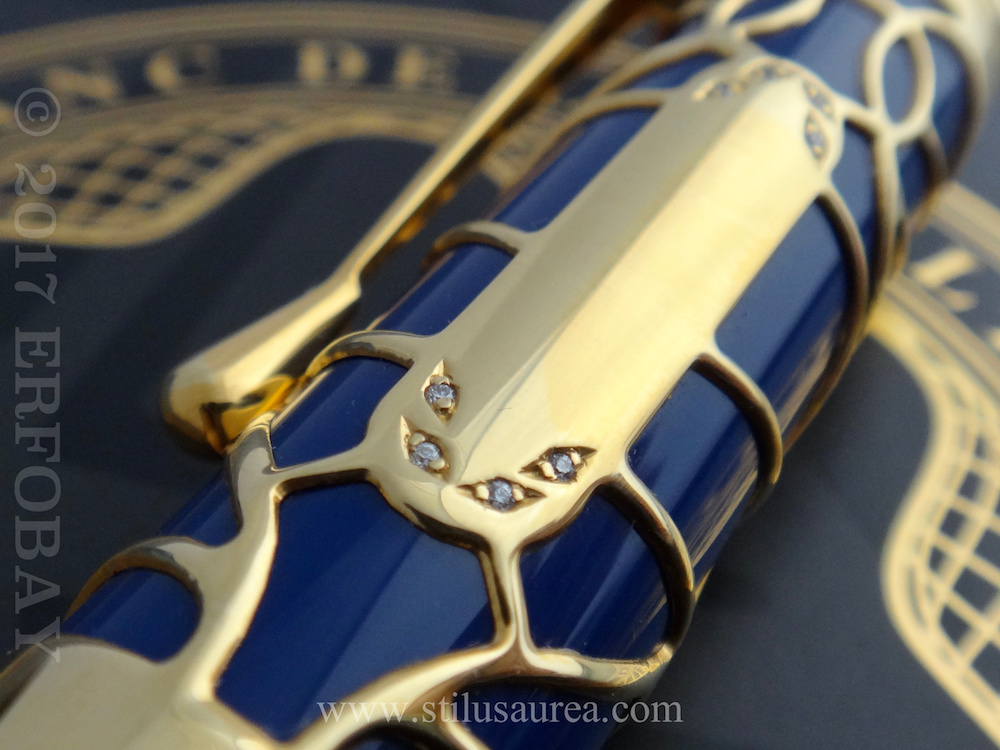 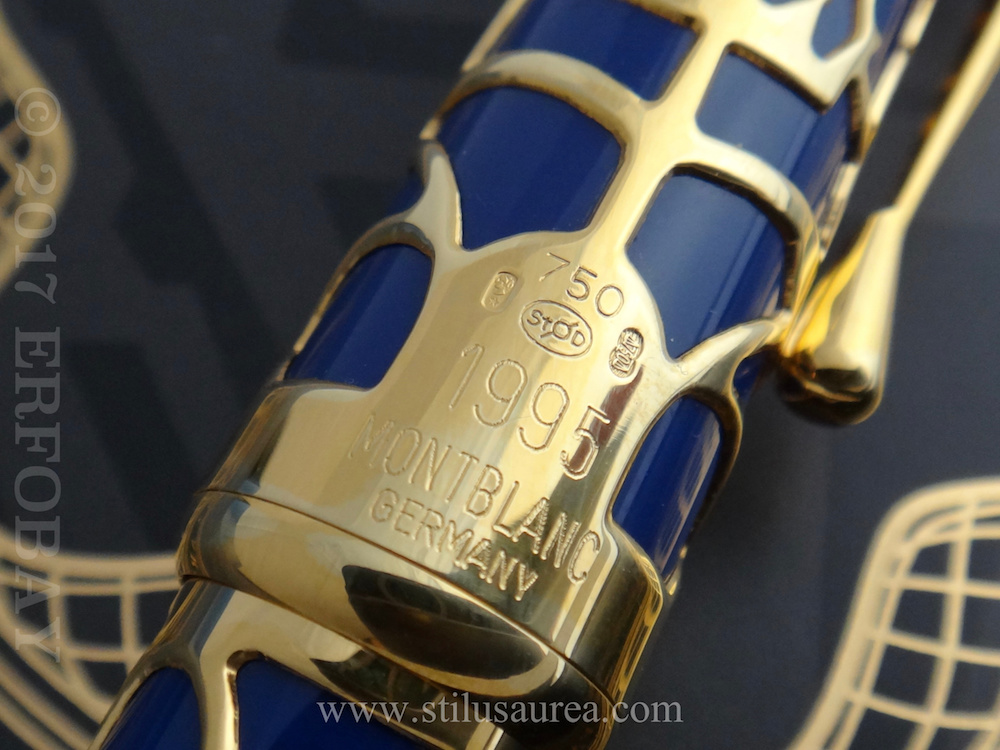 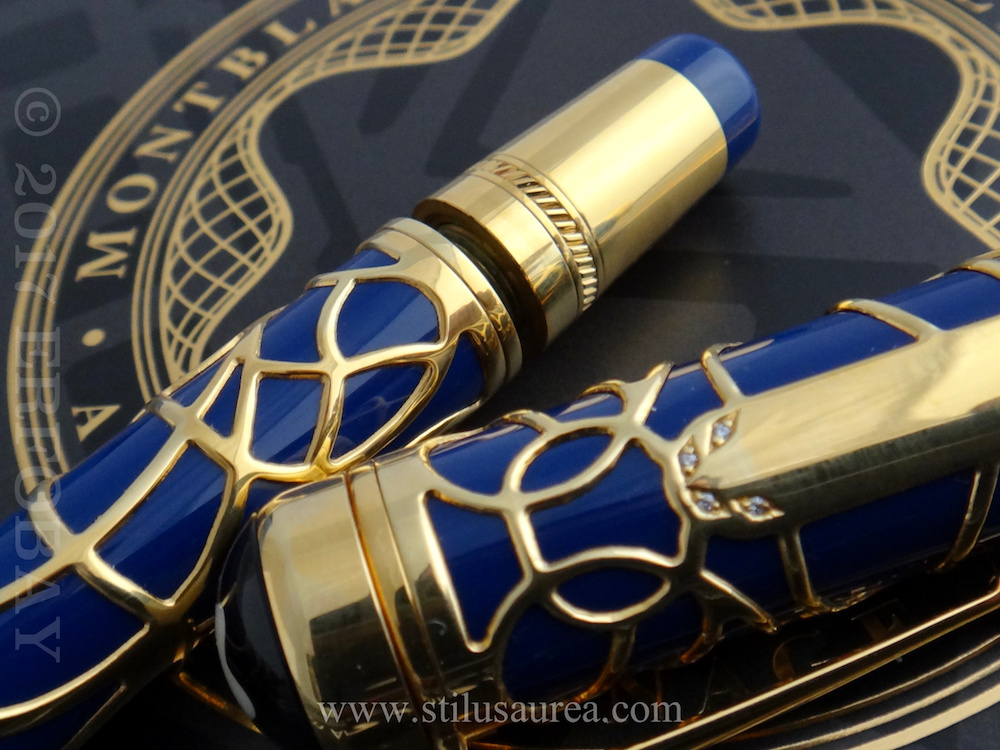 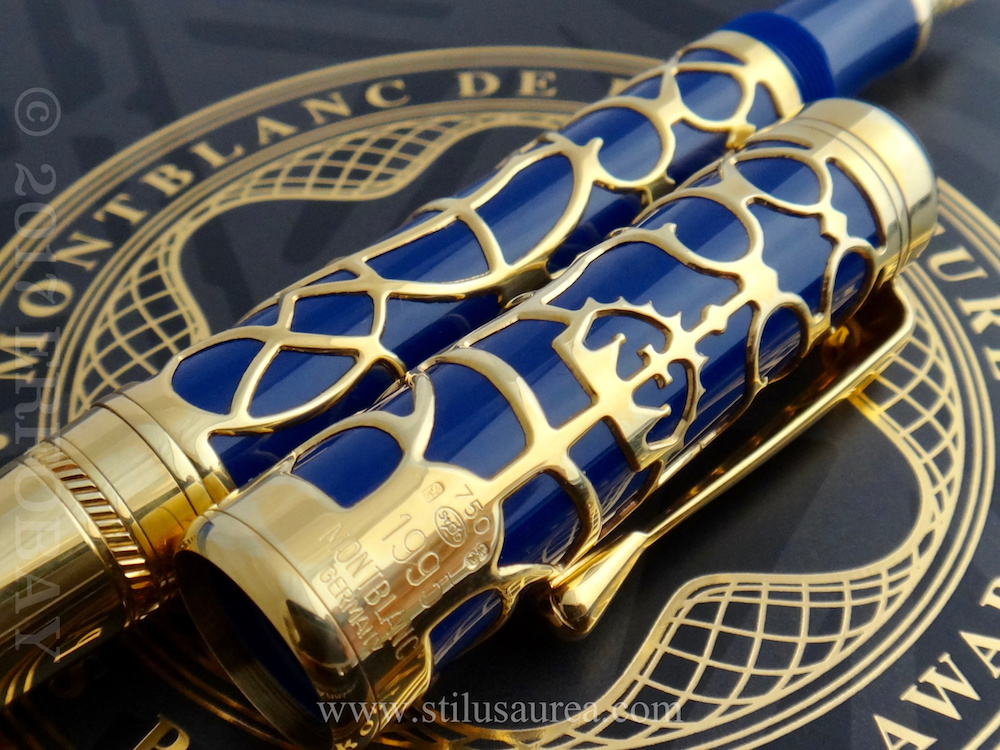 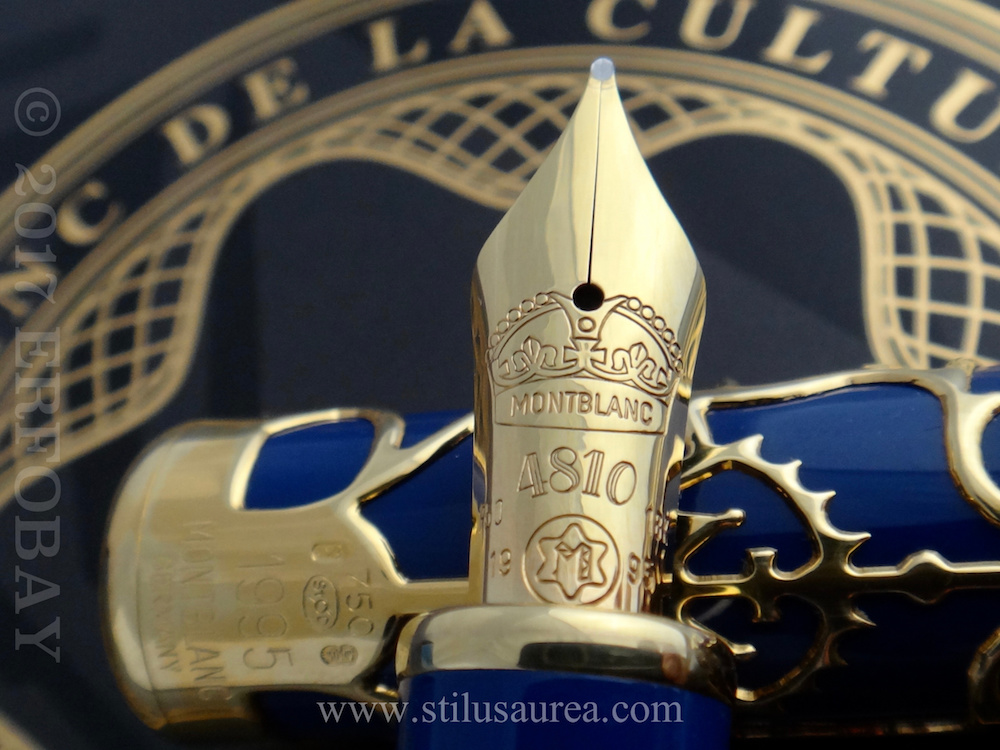 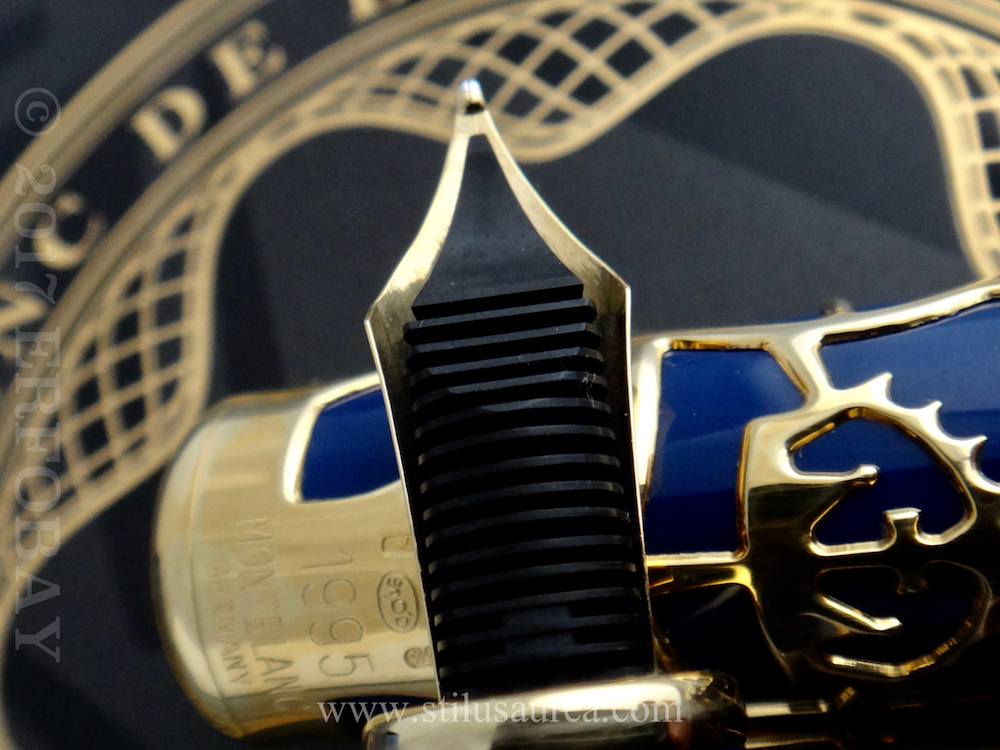 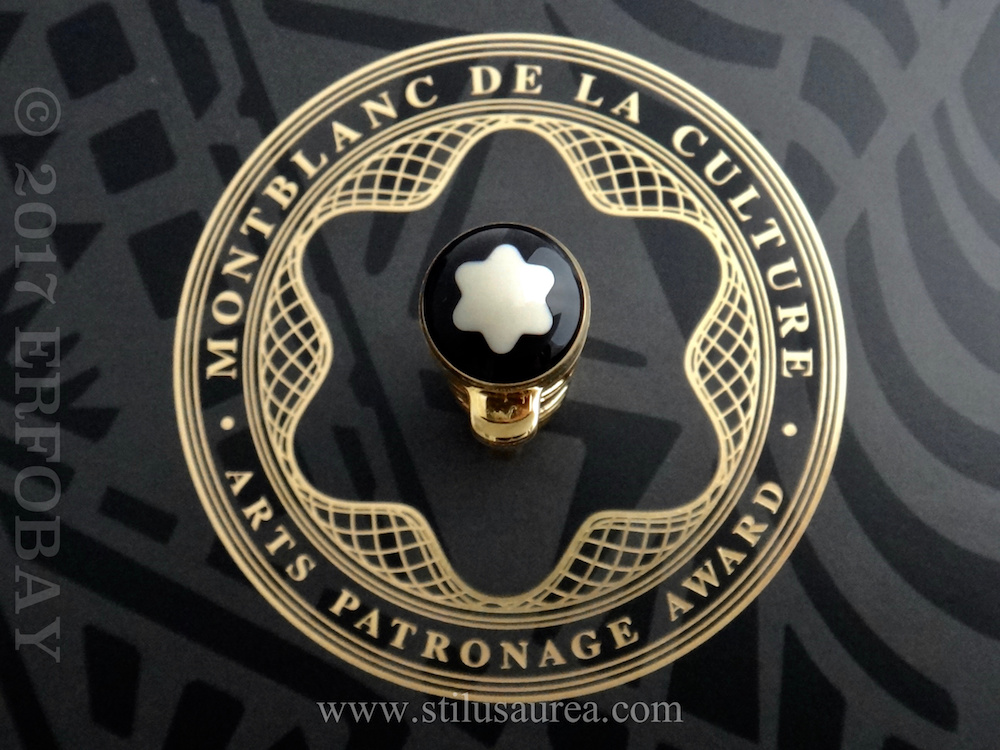 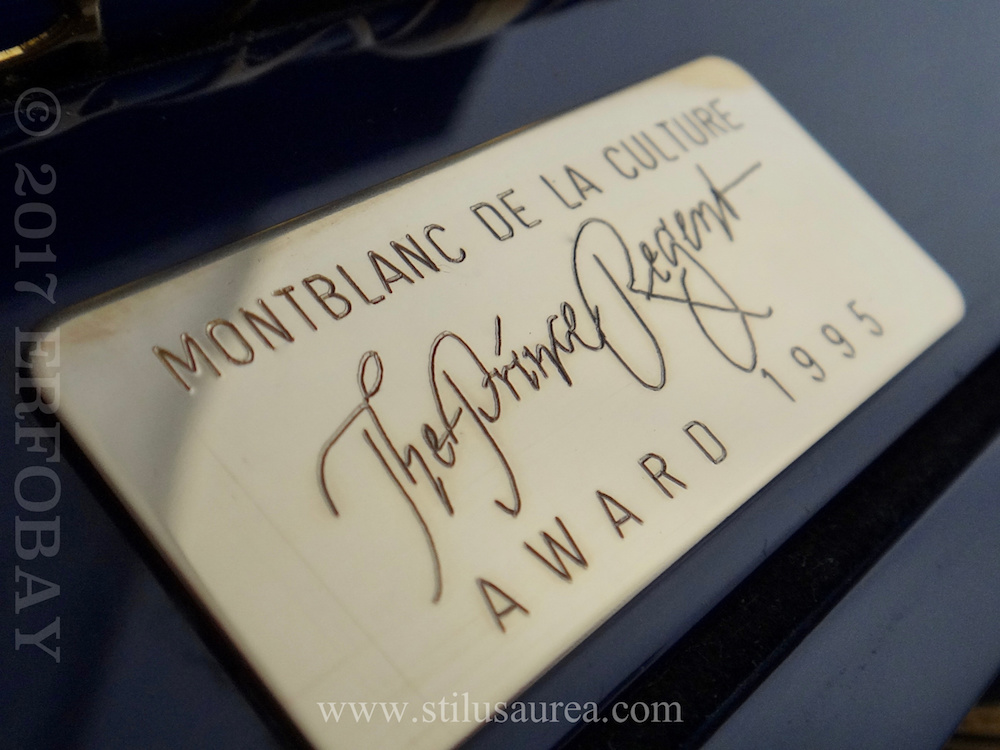 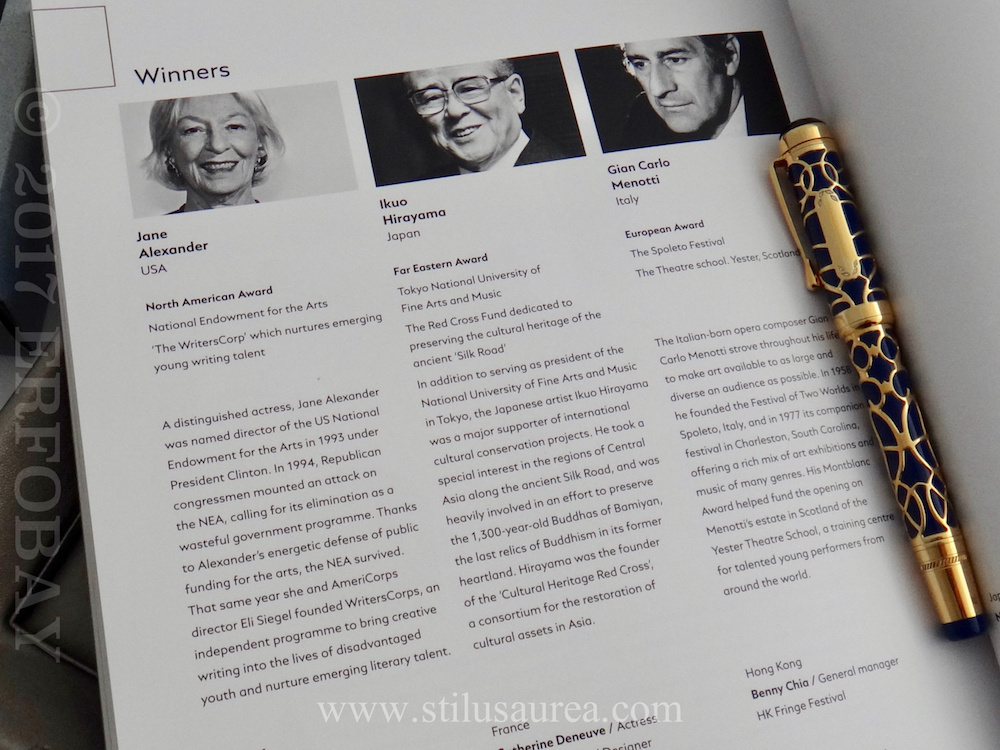 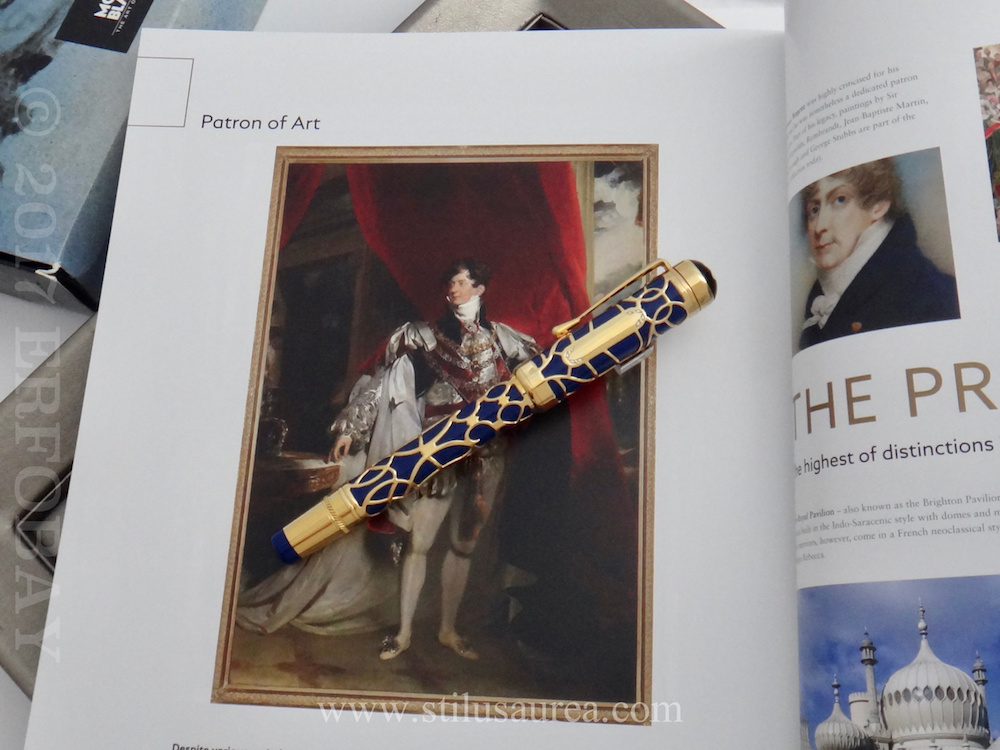 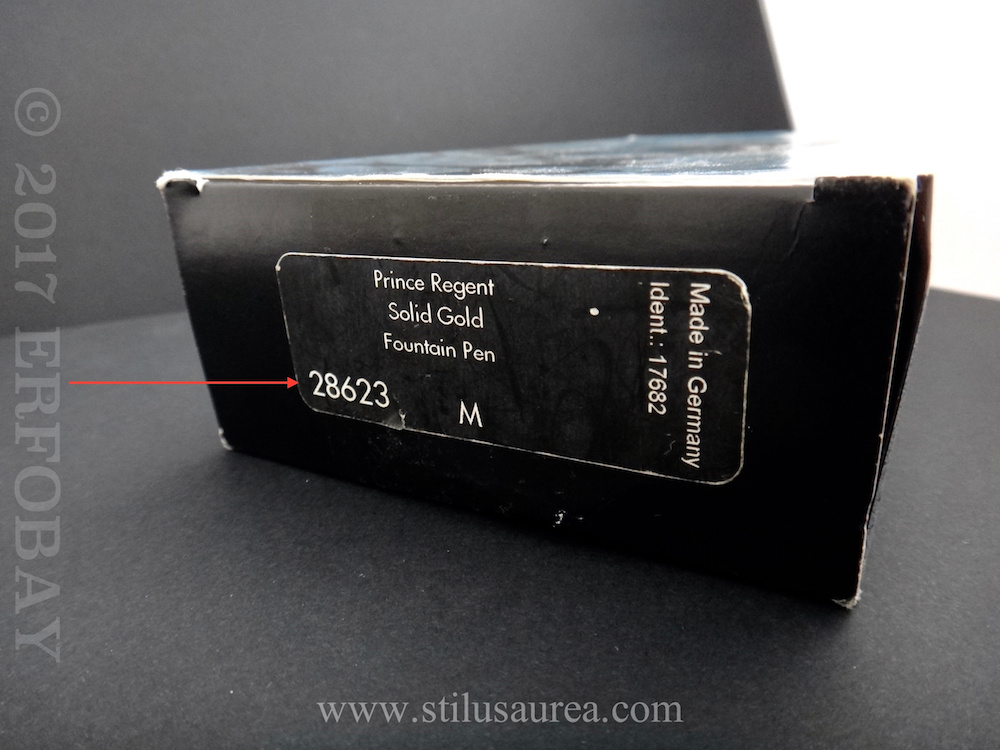 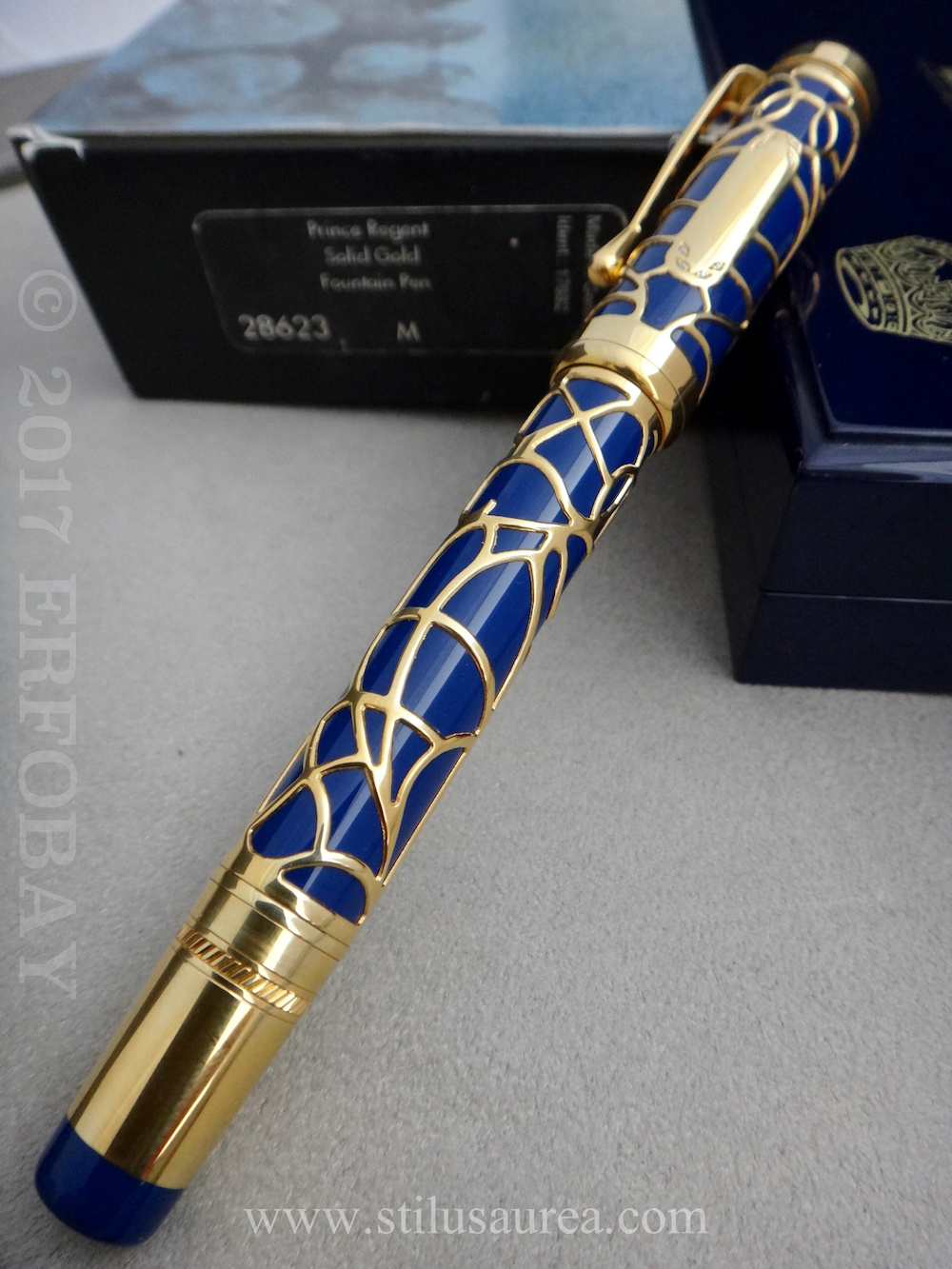 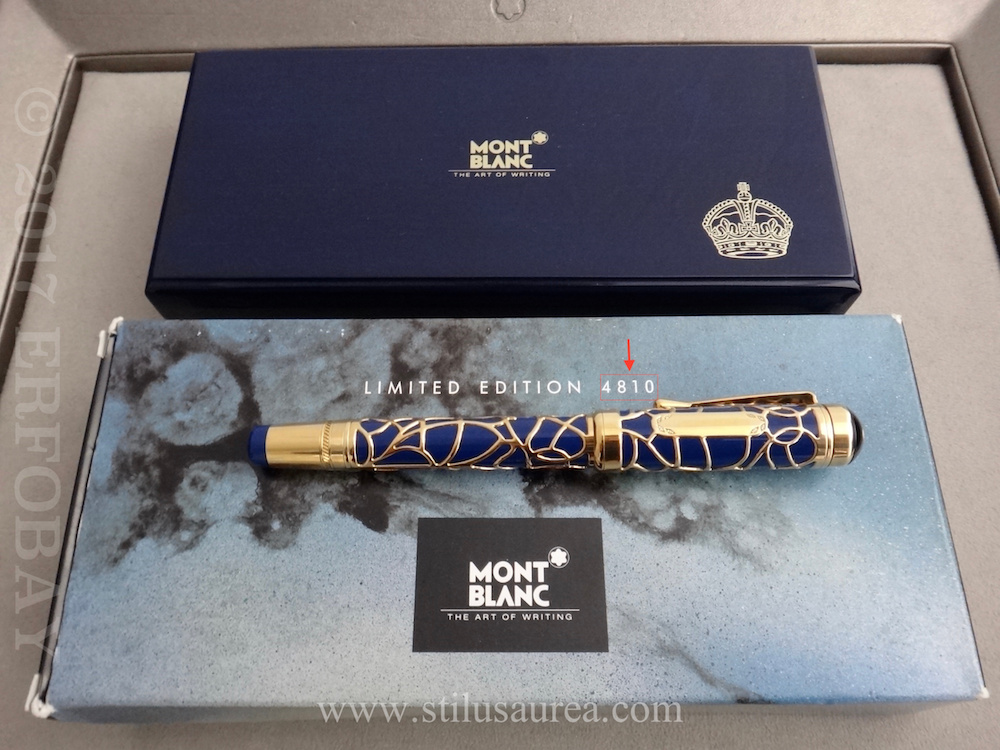